Posted on 28/10/2010 by Anak Petani
Weimar – In this lovely old city of the Republic of Germany who first stood up, after the fall of the monarchy (the kingdom). No wonder that this city name immortalized as the Weimar Republic, the German constitution was drafted and approved in 1919.
The old city is located not far from Erfurt, the capital of the State of Thuringen. Cities in the former German Democratic Republic region (East Germany), this being the birthplace of philosopher and humanist Johann Wolfgang von Goethe (1749-1832).
Indeed in that period, around the 1800s, Weimar Germany became the center of intellectual life, and even Europe. In this city also Goethe incised gold works, including works termasyhurnya final version of “Faust”.

Weimar is also the home of the philosopher Friedrich von Schiller (1787-1789 and 1799-1805). Here Schiller wrote numerous works, including “William Tell”.

As a small, beautiful town, the heart of the city of Weimar is full of old buildings are arranged beautifully. Baroque style architecture and increasingly Rococco beautify this city. 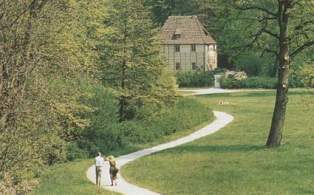 In the midst of this city also, you can enjoy the beauty of the parks and the cafes with benches in the street that smelled delicious coffee tempting. Understandably there is no pollution and the area became a pedestrian (pedestrian) so no passing vehicles.

Shopping of course no problem. Weimar is famous for the beauty of the porcelain. Especially in Schillerstrasse You can find this beautiful porcelain-porcelain.

As the hometown of scholars, few bookstores there are in the center of town. Do not miss the many souvenir shops that sell various trinkets interesting nuances of Goethe and Schiller.

One of the souvenirs the city of Weimar is Billoba Ginko plant. Starting from the seeds and the various souvenirs heart-shaped leaves were sold there. This plant is believed to be the giver of hope, in addition believed to strengthen memory and concentration power.

Also has the National Theater Weimar Germany who plays the works of Goethe, and Johann Sebastian Bach. You who love classical music can certainly spoil your ear with the works of great composers of the world.

One more do not miss the Summer Palace Schloss Belvedere. Rococco style, beauty palace buildings can be enjoyed all summer.