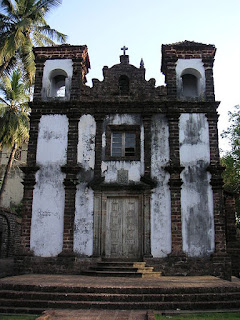 The Velha Goa (Old Goa), originally known as Goa is situated in the western India state of Goa on the left bank of the river of Mandovi, Goa Velha was once the capital of the Portuguese colony of Portuguese India.

Goa is a very old Hindu city, in its present state it was in the 15th Century re-established. Since 1510 it was the capital of Portuguese India, in its heyday it was one of about 300.000 inhabitants.

After some malaria epidemics in the 17th Century and the first half of the 18th Century (especially in 1738) moved the majority of the population in the then suburb Panaji, the seat of the Viceroy of Portuguese India, the city remained until 1759 exist, the capital of the colony until 1843 – was seen as today’s Panaji the capital and same time as Nova Goa (ie “New Goa”) went down in history as Goa Velha Goa was considered (ie, “Old Goa “) and referred to the importance of lost (the name was retained, however, to date). 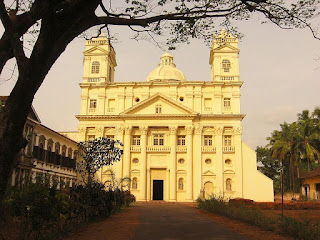 Velha Goa, which was formerly known as the “Rome of the Orient”, is now a partial run-down and the jungle reclaimed the city, which still houses many relics of the past, imposing style of the Portuguese colonial architecture. It is included in the UNESCO list of world cultural heritage.

Foreign tourists and Indian pilgrims today flocked to Velha Goa – whether to admire the giant facades and gilt altars of the well-preserved churches, or at the grave of St Francis Xavier, the famous missionary of the 16th Century, pilgrims, whose mortal remains of the Basilica do Bom Jesus are kept.

Among the most famous monuments of the city, at least the following are mentioned: