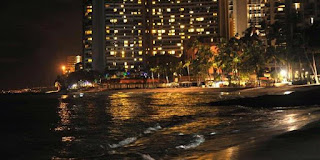 Tsunami Hit Hawaii, after Japan Quake, Friday, March, 11 2011. The impact of the tsunami wave from Japan until well into the islands of the Hawaiian Islands in the Pacific Ocean. High waves in a number of different areas, from 48 cm to 1.8 meters, but does not cause significant damage.
The highest waves hit the area reported Kahului, Maui, with a height of about 1.8 meters. However, in other areas of wave height is much lower as Nawiliwili on the Kauai Island is only 48 centimeters and at Barbers Point, Oahu, about 69 centimeters.

tsunami in Japan due to come face to face in the open sea. Tsunami warning sirens had sounded every hour once in Hawaii since the warnings issued a few minutes after an earthquake measuring 8.9 on the Richter scale rocked Japan. Residents and tourists has dievakusi in a safe place to anticipate a large wave.

In addition to Hawaii, a total of 20 countries potentially affected by the tsunami region of Japan, (read :  After Japan, Tsunami Threatens 20 Countries) including the north shore area of ​​eastern Indonesia. Small tsunami waves as high as 10 feet were reported in Bitung, North Sulawesi, and Halmahera, North Maluku last night.
This entry was posted in Hot News. Bookmark the permalink.