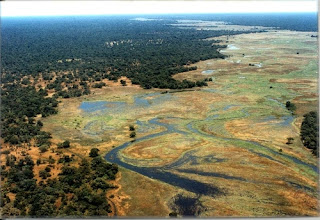 The nature park Manovo-Gounda St. Floris National Park is a province in Bamingui-Bangoran the Central African Republic. Since 1988, the area is a UNESCO World Heritage Site since 1997, is continuously on the red list of endangered world heritage, because of illegal grazing and heavily armed poachers estimated 80% of the wild stock were destroyed.

The park is significant for its rich flora and fauna. These include black rhino, elephant, cheetah, leopard, wild dog, African buffaloes and gazelles. In the northern flood plains are home to many water birds.

In 1997, four employees of the park were shot. Due to the lack of security after all development and tourism projects have been set.

With the participation of the European Union since tried to limit the establishment of Jagzonen around the park poaching. This attempt failed, however, that these areas lie in the direction of the interior, while the majority of the poachers come across the border from Chad and Sudan. These are often equipped with automatic weapons and organize regular hunt caravans along the national highway leading through the park. In a survey from the air, turned out in 2005 that some more wild lives in the hunting zones than in the National Park itself

This entry was posted in Travel to Africa. Bookmark the permalink.