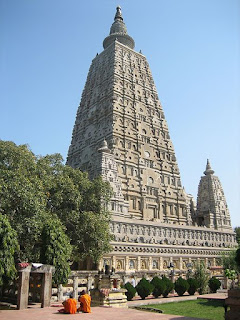 The Mahabodhi temple (Great Awakening Temple) is a Buddhist temple in Bodh Gaya in the northeastern Indian state of Bihar. According to tradition it is the place where Siddhartha Gautama, the historical Buddha, the awakening (Bodhi) gained.
The Mahabodi Temple is a 55 m high brick buildings dating from the 1st to 3 Century AD The facade has seven levels and is decorated with numerous Buddha statues. The frieze that runs along three sides around the base of the temple shows, 85 sandstone Buddha from the Sunga period (1st century BC). In the temple Inside is a gilded statue of the meditating Buddha. On the north side of the temple lies the gem path (Chankramanar), which consists of 19 stone lotus flowers that mark the path where the Buddha in the second week after his Bodhi experience according to tradition, the practice of walking meditation. The temple houses many stupas.


On the west side of the pyramid-shaped stupa is the great sacred Mahabodhi, a poplar-fig (Ficus religiosa, also Bodhi-tree), which is according to tradition, a descendant of that tree under which Siddhartha Gautama attained Bodhi. Under the Bodhi-tree marked the diamond throne (Vajrasana), a platform of red sandstone, the site where he had settled down to meditate.