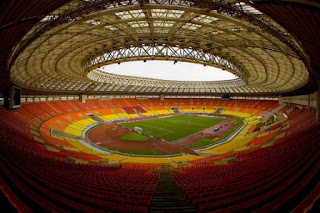 Luzhniki Stadium is the largest sports stadium in Russia, located in Luzhniki, Moscow. The stadium has a capacity of 84,745 seats. The stadium opened in 1956. The stadium has also been a place of the Summer Olympics 1980 (when the capacity reaches 103,000 viewers). It is the headquarters of the club Torpedo Moscow, and Spartak Moscow. Since 2002 the stadium has started using artificial grass is more in line with Moscow that very cold weather.

By UEFA, the stadium has given the stadium rating of 5 stars, and to host Champions League final in 2008.