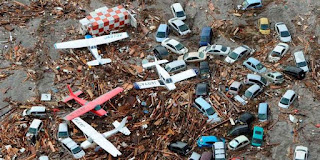 Japan Tsunami Victims, at least 402 people have been killed in a powerful earthquake measuring 8.9 on the Richter scale and the tsunami that struck Japan, Friday, March 11, 2011. However, Kyodo news agency said the death toll estimated at more than 1,000 people.

At daybreak in the country Saturday morning, a day after the disaster, the Japanese news agency, Jiji Press, said the police and other data show the number of dead and missing from the quake reached 1,000 people more.
earthquake and tsunami disaster which destroyed most of Japan’s Pacific coast in the north of the country. Police in Sendai, Miyagi Prefecture, separately said that 200 to 300 corpses have been found on the beach. 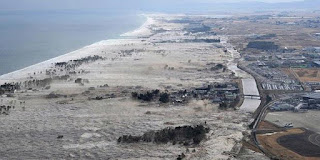 Anxiety continued to increase to a greater loss of life when there are reports of a drifting ship with 100 passengers, a number of missing the train carriages, and a dam burst its banks flooding many homes.

Japan’s defense ministry said about 1,800 houses in Minamisoma, Fukushima Prefecture, were destroyed, while in Sendai authorities say a house collapsed by the 1200 tsunami. In a small town in northern Ofunato reported that more than 300 houses collapsed or washed away.

More than 80 fires raged in and around Tokyo and in Iwate, Miyagi, Akita and Fukushima Prefecture, Kyodo reported, quoting data from the Agency for Disaster Management and Extinction of the Japanese.

Monster quake was recorded as the strongest earthquake that occurred in the archipelago that is seismically unstable and is located on the Pacific Ring of Fire.