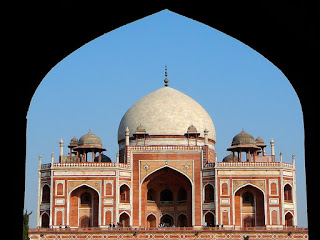 The mausoleum stands in the district of Nizamuddin East, at the intersection of Lodi Road and Mathura Road. The time of the Slave Dynasty was one of the area into a fortress KiloKheri, the capital of Sultan Kequbad, son of Nasiruddin (1268-1287). The site includes, in addition to the main tomb of the Humayunaus a large ensemble of buildings of Mughal architecture.

The building is India’s first Mogul grave. With the construction of 1562 (according to other sources 1564) on the instructions of Haji Begum (also Hamida Banu Begum) was Humayun’s widow and mother of Akbar (1542-1605), started the construction period lasted for eight years. The building owner was keeping a watchful eye on the work and even proposed to place their camp. Architects of the building should Sayyed Muhammad ibn Mirak Ghiyathuddin and his father Mirak Ghiyathuddin have been, who came from Herat in Afghanistan. The grave is due to the elegant Persian style of the most magnificent historical monuments in Delhi. 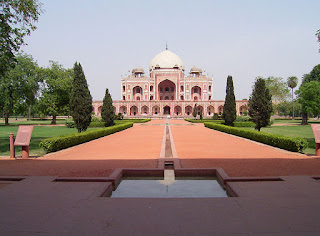 The architectural style is similar to the Taj Mahal in Agra. On a platform is the square building with high-centered arch Ivan on the coordinate system and chamfered corners. A two-story octagonal central open space is transformed into the dome of trompe circle. The keel-arched dome was customary at that time in the home of the Persian architect, as the light metal rod, which increases the dome in the center. To build a garden in the Chahar-Bagh is one style, the first of its kind in the region.

Later the site was used for burial of other moguls. It served as a refuge for the last ruler, Bahadur Shah II (1775-1862), which the British captured in 1857 in this place.

Since 1993, the building complex world cultural heritage site by UNESCO. In 2003 restoration work was completed, funded by the Aga Khan Cultural Trust. They allowed that water can flow back into the channels of the garden.