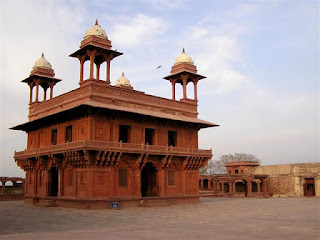 Fatehpur Sikri (Phatehpur Sikri) is a city in the state of Uttar Pradesh in India with some 30,000 inhabitants, located 40 miles southwest of Agra, the former capital city (1571-1585) of the Mogul Empire. The monuments of the city under UNESCO protection and belong to the world cultural heritage site.
The former capital of the Mughal Empire under Emperor Akbar (1542-1605) was built in 1569-1574. 1571 Akbar moved his court here, already 1585 he moved the court but to Lahore, from where he could conduct his campaigns to the Northwest better. In addition, the city water supply was probably inadequate. It provided an excellent diplomat and military strategist, his newly won territories through a policy of religious tolerance in the dialogue with representatives of the major faiths.

Akbar married the first Mughal ruler of a Hindu, a Rajput princess from Amber and created the non-Muslims from special taxes imposed. Since he won, often through marriage, the loyalty of local princes, he managed to establish an efficient tax system, which enabled him finally to have built Fatehpur Sikri.

Despite his many wives he had long time no heirs, so that he was impressed when he lives in Sikri Sheikh Selim predicted three sons and the prophecy (under the authority of the sheikhs, not in the harem) also arrived. In his honor, Fatehpur Sikri was built.