The railway line was built 1879-1881 by the British colonial government. It overcomes to 86 km a vertical drop of 2,000 m and this schedule needs 6 1 / 2 hours, which can be in practice before to 10 hours. Often make the tracks impassable mud slides, so having to switch halfway the transportation needs. 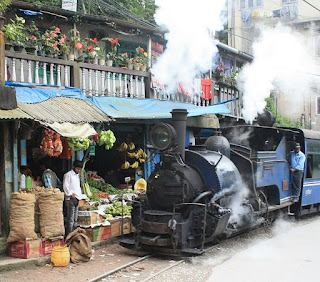 The track runs mostly along the roadside of the Hill Cart Road, which in part corresponds to the National Highway 55th The roadsides are often built with houses – wide sections have almost the character of a tram. It is almost non-stop honking to warn residents and careless drivers of the train. The diesels are equipped with a very loud horn, which drowned out the horns of Indian trucks clear. As the cars are not sound proof, you should wear hearing protection as a passenger.