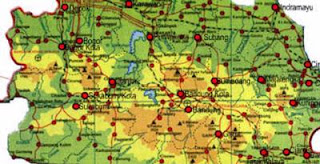 Earthquake (5.3 Richer Scale) hits the southern part of West Java (Indonesia), including Sukabumi, Garut, Tasikmalaya and Cianjur on Sunday, March 20, 2011 early morning, at 8:20 AM. Earthquakes are no potential tsunami. The quake’s epicenter was in 113 KM southwest of Sukabumi with a depth of 10 KM. No severe damage due to shocks of this earthquake. The quake was also felt in South Bandung, such as Pangalengan. In fact, according to residents, on Friday, March 18, 2011 also had an earthquake for 2-3 minutes.

The quake’s epicenter is the location of the collision Indoaustronesia plates, with plate Indoeuronesia quite active. The point of collision is quite active there. However, its location is different from the epicenter in the sea off Tasikmalaya. As we know, the West Java region is the path of the earthquake-prone. Finally, a high magnitude earthquake occurred on September 9, 2009 and caused damage in some areas in the southern part of West Java.

Earthquake and Tsunami in Japan (March 11, 2011), but the BMKG Bandung confirmed that the earthquake that occurred on Sunday, March 20, 2011 was not a potential tsunami.