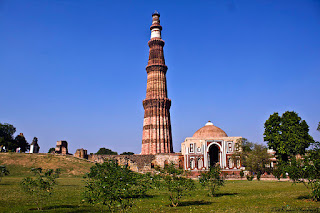 The Qutb Minar is a victory column and a minaret in India. It is in the Qutb complex in Delhi. Since 1993 he has been part of world cultural heritage by UNESCO. The Qutb Minar is a sandstone tower with a height of 72.5 meters and a diameter of 14.3 m at the base and 2.75 m at the top. An ascent of the tower is now no longer possible.

The foundation stone was laid in 1192 by Qutb-ud-Din Aibak after the victory of Muslims over the Hindus. Therefore, the material of 27 older Jaina and Hindu temples were used, which were destroyed on the premises of Qutb-ud-Din Aibak. Between 1211 and 1236 he was finished as a victory tower and minaret by his second successor, Shams-ud-din Iltutmish. According to the inscriptions on the surface of the tower, he was of Firuz Shah Tughluq (1351-88) and Sikandar Lodi II (1489-1517) repaired. This happened when Firuz Shah Tughluq allegedly been damaged by lightning or earthquakes.

The information on the causes of damage to the Qutb Minar are always contradictory. There you will find the sources of lightning and others call the earthquake. Firuz Shah Tughluq replaced the top floor of the two still existing upper floors. The repair was carried out by Sikander Lodi has been damaged by the 1505. Around the year 1800, the Qutb Minar was damaged again this damage was corrected to 1829 by Major R. Smith, a British engineer. It also has a roof dome of Firuz Shah Tughluq on top of the tower was replaced by a new one. In 1848, the dome roof of Henry Hardinge, 1st Viscount Hardinge from the spire and in the garden up again.
This entry was posted in Travel to Asia. Bookmark the permalink.