Nuclear Crisis : 12 Countries Prohibit Their Citizens Not to Travel to Japan 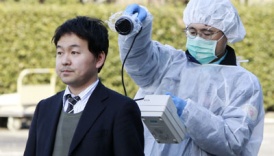 12 countries issued a warning to its citizens not to travel to Japan. The warning was issued after the quake hit by 8.9 Richter scale earthquake that followed the tsunami. Later, three nuclear power plants they explode. The Japanese government has announced emergency nuclear crisis.
Here are the countries that request and urge their citizens to postpone departure to Japan.

1. AUSTRALIA
Australian government urged its citizens to not to Japan. They had not yet reached the stage ban, only appealed. They called for citizens to obey the nuclear radiation zone 20 kilometers from a nuclear reactor complex in Fukushima. “This is the result of our consultation with the Agency for Nuclear and Radiation Safety Australia,” said Foreign Minister Kevin Rudd.

2. UNITED KINGDOM
The British government issued an appeal to all its citizens to cancel a planned trip to Japan for now. “Unless there is a very strong reason,” said British Foreign Secretary, Jeremy Browne.

3. CANADA
The Canadian government banned its citizens approached the Fukushima nuclear reactor complex with a radius of 20 kilometers. They also asked its citizens not to come to Japan when there is no essential.

4. CHINESE
China Airlines, Air China to cancel all flights from Beijing and Shanghai to Tokyo on Tuesday (15 / 3).

5. CROATIA
Krosia Government urged its citizens to postpone departure to Japan. The citizens of Croatia who was in Japan was also forbidden to approach the danger zone at the Fukushima nuclear.

6. FRANCE
French Embassy in Tokyo asked its residents to stay indoors and close all windows. Parties to the French Embassy worried due to the explosion of nuclear radiation in pembangki nuclear power plant in Fukushima.

7. GERMANY
German Foreign Ministry called on German citizens not to travel to Japan.

8. SLOVAKIA
Slovak government asked its citizens to cancel the whole trip to Japan.

9. SLOVENIA
Slovenian Foreign Ministry asked its citizens not to go to Jepan unless urgent.

10. SOUTH KOREA
South Korean Foreign Ministry urged its citizens not to go to Japan, especially north of Tokyo and Fukushima.

11. PHILIPPINES
Philippines Embassy to repatriate some of his staff. Philippine Ambassador to Tokyo, Manuel Lopez also offers assistance to all Filipinos who want to go home. “We can help to get a flight,” said Lopez.

12. UNITED STATES
The United States government asked its citizens not to come to Japan at this time.