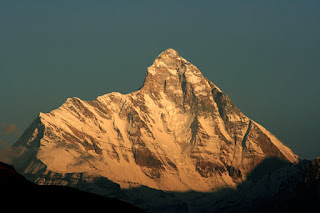 Nanda Devi is the highest mountain located entirely within the territory of India, the second highest total after Kanchenjunga (Sikkim). His name means goddess of joy. In addition to the 7816 m high main peak, there is the 7434 m high east summit.

When the mountain was climbed in 1936 by a British-American expedition, the first time, he was the highest peak climbed to the first ascent of Annapurna (8091 m) in 1950.

In the 1960s, it is testing the U.S. Central Intelligence Agency have given to install equipment for spying on the summit of Chinese nuclear activities in Tibet. The devices are to be lost in an avalanche. Then the area was closed from 1968 to 1974. In 1982, the nature reserve around the Nanda Devi was transformed into a national park. Since the ascent of Nanda Devi is prohibited for environmental reasons. The Nanda Devi National Park was incorporated in 1988 in the list of UNESCO world natural heritage.