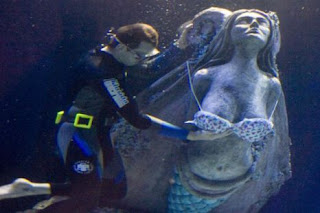 In order to maintain decorum and for the attention of visitors again focused on the submarine tour, a diver was assigned to cover the breasts mermaid statue.

According to the staff, the visitors are mainly young men to pay attention not to the marine life in the garden of the tunnel under the water, but the beautiful views of the statue.

Leadership marine park Sea Life Chessington to cover up a statue of a mermaid with breasts underwear because the mermaid too attract attention. The manager, Justine Locker said, “Well this is a bit inconvenient. At first we did not realize how montoknya Sally to a few teenage boys and young men who no longer spent a long time staring at a mermaid was in the tunnel under the sea.

Since then we noticed the statue was indeed seem very interesting, especially for male visitors, so they decided it was time we covered the naked body of the mermaid.