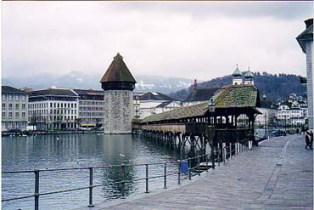 Lucerne is known for one of the leading tourist Switzerland. Small town located on the edge of the lake is different from Zuerich, the largest city in the country, has a population of 350 thousand inhabitants. From Lucerne also far less populated than the Basel, Geneva or Bern. But for tourism affairs, a small town in central Switzerland was able to jump over the splendor of the city in Switzerland. Lucerne is known as one of the resort destination in the European sphere. Saban is a tour to Switzerland, a visit to Lucerne as never pass up.

Once stepping on the city railway station and crossed the street toward the area of the Altstadt (old town), hundreds and perhaps thousands of tourists from Asia could be as sprayed from large buses special tourism, the crowded steps of this beautiful city streets.

Lucerne tourism industry in competing with the industry’s most popular services in Switzerland, such a bank or insurance. Year, the Lucerne is able to attract at least 5 million tourists. “Because the Iraq war and sars, this year the tourists who come no more,” said Angela Kaufmann from the statistical office of the city.

Before the famous, as now, Lucerne is a fishing village. Local people take advantage of Lake Lucerne as a source of livelihood, in addition to farmers and ranchers, of course. But since the paths in the Alps in San Gotthardo opened which connects Central Switzerland and Italy in 1220, this small fishing town gradually developed as it is now.

Lucerne underestimated eventually grew into a charming small town. Both because of its culture that is still relatively Switzerland, also because the landscape of this city that still preserved the ancient and natural very neat. In some of its satellite cities such as Meggen, Kriens, Emmen, Kuessnach, Littau until Ebikon, often found Swiss people who raise chickens or rabbits. Not infrequently, every weekend there is an exhibition rabbits and chickens numbering around 50 fish only.

Mark Twain Heritage
There are a variety of panoramas as well as activities that make the Lucerne attractive to tourists. Among other ancient wooden bridge Lucerne, buildings or buildings of the past, dozens of museums, Lake Lucerne and the two tops of the Alps which has a very beautiful panorama, the Mount Rigi and Pilatus. Mark Twain, famous American writer to have to write a small book about the magnitude of the beauty of these two mountains.

The roads in the city of Lucerne segment quite fun, especially when stepping on the summer. Clean city like most cities in Switzerland. Transportation is very nice and neat. But the most captivating as well as comfortable if you get around Lucerne on foot only. Car or motor vehicle stops every one who would cross the street at the zebra cross paths. Lucerne traffic is known as a highly respected traffic pedestrians or cyclists.

Some streets are filled with ancient building style of the era of Renaissance architects also have a special road only for pedestrians. Bicycles also, in the region of this kind, are prohibited entry. So, walk while exploring the city with the shadows of ancient buildings or just sit in the park to sunbathe while to feed the geese or ducks on the lake, into an activity that is so expensive to be held in Jakarta, for example.

Never miss to explore Kapellbruecke, a wooden bridge with a water tower that is so famous in this city. Built in 1333, Kapellbruecke a land mark of this city. Nearly every postcard of Lucerne often include images Kapellbruecke with the water tower was roofed octagonal. Kapellbruecke was once engulfed in flames scorched half, including ancient paintings that hang on its roof in 1993. However repaired again and now functioning as usual.

In the afternoon, hundreds of tourists and the people of this city through this ancient bridge. Unfortunately in some of the pillars and walls of this ancient bridge, seen vandalism through graffiti hands with markers or ball point. The average tourist is this act because it looks like the wish to stick a reminder in this town.

Museum
If interested in ancient objects or paintings, Lucerne also provide the place. Dozens of museums in this city. However, the most interesting is the Museum of Transportation and the Pablo Picasso Museum, the Italian painter cubism flow. Transportation Museum’s most crowded because it’s full of tourists and large the most complete collection.

While the Pablo Picasso Museum absorb tourists who want to see paintings and photographs of the maestro during life. In addition to its place in the heart of the city, the museum is also maintained to perfection.

Bored with the museum or the atmosphere of Lucerne, please enjoy a panoramic view of Lake Lucerne. Many ship schedules that will transport you to enjoy the Lake Lucerne. Just come alone to the main pier near Lucerne railway station, at close range, the pier was already visible.

Meanwhile, for those who want to enjoy the beauty of Lucerne from a rather large, can choose their own tour or road to Mount Pilatus or Mount Rigi. Two very famous mountain in Lucerne. There’s even idioms do not say never to Lucerne if you’ve never reached the second peak of the mountain.

Although at the top of the mountain, but the Swiss people are very smart to make a remote place to be very easy to reach. Understandably, there is a suspension cable railway that will take tourists to the second summit of this mountain. There are also regular trains headed to the second peak, but this train will be closed during snow season. While the suspension cable railway operates throughout the season. American writer Mark Twain who once stopped at the second summit of this mountain, said to get to the top was draped on his back by other people. Understand it, that era is anyone who wants to the top of Rigi or Pilatus had to walk, except for Mark Twain.