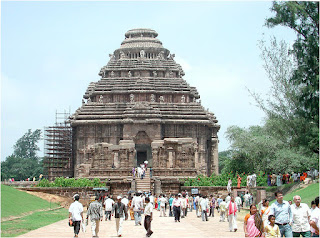 Konark (Konarak) is a small town on the Bay of Bengal in the Indian state of Orissa, about 35 km from Puri. She is known by the local sun temple, a UNESCO World Heritage Site.

The temple was the mid-13th Century by King Narasimha Deva (1238-1264) and built a short time later, or even abandoned during construction. The original temple tower is not obtained. It is uncertain whether he was ever completely finished. The now well-preserved part is the high base of main temple area and lobby. The building was erected as a symbolic pair (Ratha) of the sun god Surya, with seven horses. Surya on the back of another statue of green granite is obtained. located on the high pedestal of the temple area are 24 large, carved from the stone chariot wheel, the remains of the draft horses and a huge variety of smaller detailed images. Many of them represent people in sexual action based on this. 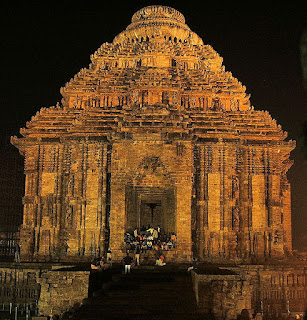 On buildings and repairs were made to keep the substance and stability. The new parts are made from the same rock as the original construction, but without restoration of the original figurative representations (see details above in the areas with missing central image). For security reasons, not all parts of the building are accessible to the public, but the number of surviving rich relief decorations and characters to look very good.

In December in Konark Festival every year instead of the classical Indian dance. There are performances of traditional Odissi dance.