The narrow-gauge train Kalka-Shimla Railway is a railroad track width 762 mm in the north-west India, which runs from Kalka to Shimla, the state capital of Himachal Pradesh. Because the track width and the relatively small number of carriages it is – like other narrow gauge railways in India – also known as Toy Train (toy train) is known.

It is a regular railway of Indian Railways, the ride is, however, with tourists because of the spectacular route extremely popular. 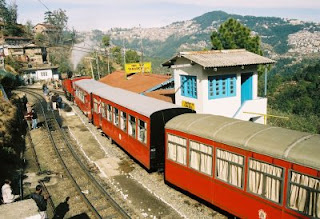 Which was in the foothills of the Himalayas at about 2100-2200 meters Shimla town since the mid-19th Century (officially in 1864) ‘Summer Capital’ of the government of British India, as the officials missed the Heat in the larger cities such as Delhi and Kolkata wanted. The railway line was the end of the 19th Century on behalf of the British colonial government built to facilitate transport between Delhi and Shimla and faster. On 9 November 1903 was officially opened the connection.

Route of  Kalka-Shimla Railway
The track is a total of 96.5 kilometers and overcomes this distance, a vertical drop of 1,420 m (Kalka: 656 m, Shimla Railway Station: 2076 m). In addition to the large slope will happen on the relatively short distance, 864 bridges (many viaducts), 102 tunnels (the longest of which 1.14 km long), 919 curves and 18 mostly smaller stations or drive through. Overall, the trip takes about 5-6 hours out of the train present themselves in the valleys and spectacular views of the surrounding mountains, most of the way through (coniferous) forest.
This entry was posted in Travel to Asia. Bookmark the permalink.