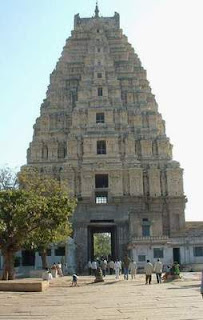 Hampi is an ancient India site, which was from about 1343 the capital of the Hindu Kingdom of Vijayanagar and the heyday of about 200,000, according to other estimates even had 500,000 residents. She joined in 1986 as a UNESCO World Heritage Site. Hampi is now only a village of 2134 inhabitants (2001 census).

The World Heritage Site, Hampi is located in the districts of Koppal and Bellary of the southern Indian state of Karnataka. [2] are the ruins of the city spread over 26 square kilometers in one to one time well defending the area south of the Tungabhadra river, on the other side is the area of ​​hard-to- traversing rocky hills surrounded. On a final flowering early 16th Century was followed by disputes about the succession. After four of the five Deccan sultanates had joined forces, they fought a common war against the kingdom of Vijayanagar, which was defeated in the decisive battle in 1564 at Talikota of the Muslim armies. The city was largely destroyed, the surviving inhabitants were forced to flee.

From the ramparts that once surrounded the city, only few remains are preserved in the palaces of some foundations. But many temples made of hard granite have survived. Remained were small Jain temple ruins from the 10th Century, the most elaborate and best preserved temple in Vijayanagara style are from the 14-16. Century. The climax of this style is the Vitthala temple from the middle of the 15th Century reached. He stands in the north near the river, three high Gopurams (gate towers) define an area of ​​164 x 94 meters. There are several Mandapas (porches), including the usual hundred pillared hall. The main temple dedicated to Vishnu, whose mount is Garuda – the only one in India – in a free-standing, faithful to sit for the wooden model carved in stone ratha (temple car). 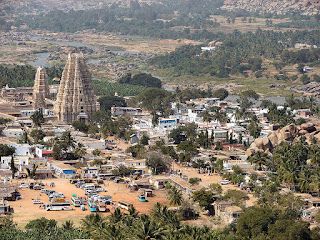 Today, the main temple and the afferent Hampi Bazaar Street by locals and merchants are revived from other states. The cult buildings are surrounded by an unusual rocky landscape and fertile banana plantations and rice fields surrounded, watered by the Tunghabhadra River. The Indian government built near Tungabhadra Dam supplies the area with electricity.

At some points may be placed across the river with small round basket boats that look like turtle shells to Anegondi reach, the northern outpost of the city, are obtained from the a wide area, only very little remains.

During the 1990s, Hampi was amplified to a tourist destination. The flow and near the temples, especially near the Virupaksha Temple, Hampi, the small town within a few years has been greatly expanded. Where was previously free country, are now a few guesthouses and restaurants. Perhaps this should the historical image disturbing new buildings be torn down and built some distance back, so that the status of world cultural heritage is not compromised.

In and around Hampi are home to many macaques, which have no shyness. Because of its proximity to the water Hampi is plagued by mosquitoes, the malaria risk is therefore high compared to the rest of India.