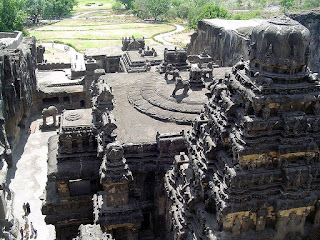 Ellora (local name: Ellura) is a village in the Indian state of Maharashtra, about 30 km northwest of Aurangabad.
Ellora is famous for its caves and rock temples, monasteries and chapels, the first on 5 and 10 Century AD as part of the Deccan architecture from a 2 km long which runs from North West South East basaltic rock face beaten. The UNESCO declared 1983 the total of 34 buildings on the World Heritage Site.

Most of the buildings are characterized by rich sculptural decoration.

5: The largest Buddhist Vihara of the group with a total of 20 cells.

6: A large vihara with sculptures of the Vajrayana pantheon in the hall.

10: A Chaitya from the 8th Century AD, with an open courtyard and three entrances. The hewn from the rock facade has two stories.

12: A three Vihara with simple but impressive three-storey facade also. Inside, find a wealth of sculptures.

14: The so-called Ravana Cave shows a sculpture of Ravana shaking in the holy Mount Kailash.

16: The square Hindu Kailasa Temple (or Temple of Ellora Kailasanatha) with a side length of 46 meters, the most impressive temple in Ellora. At the same time he is considered the greatest rock temples of India. He has, unlike the other buildings Ellora’s not just a facade, but has been around exposed and richly decorated. But 150000-200000 T soil had to be removed.