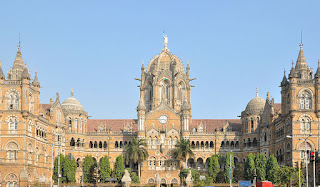 The Chhatrapati Shivaji Terminus (Victoria Terminus to 1996) is a station of Indian Railways in the south of Mumbai. He is one of the largest and busiest train stations in the world and since 2004 a UNESCO World Heritage Site.

The British architect Frederick William Stevens (1847-1900) was commissioned in 1878, a railway station building to create a western terminus for long distance service to and from the then Bombay. In his preliminary studies in England he was the station building of London’s St. Pancras station-inspired, with the Chhatrapati Shivaji Terminus has similarities. Since 1888 the building was completed, it was considered the largest and most important buildings of British India. In the late 1920s it was expanded to also serve its suburban services.

The building is in the style of Victorian Gothic Revival. Fields marked with a steel and glass roof platforms are about 400 meters long. Above the main entrance there is an approximately 100 meter high, walk, octagonal dome that is supported by a rib structure. In interior are open doorways. The building is richly decorated with stone sculptures and reliefs. On the dome stands the sculpture of Lady of Progress. 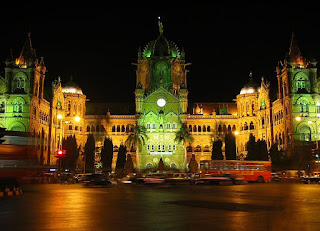 Every day more than 1,000 trains pass through and around three million people this station. He is next to Tokyo Shinjuku passengers one of the busiest stations in the world. He was first named after the British Queen Victoria. Since 1996 he is named after the Hindu Marathenführers (Bombay, as “patron”) Shivaji.