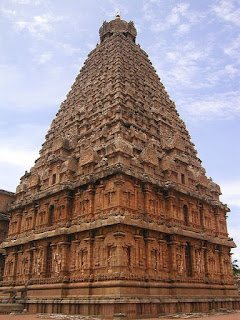 The Brihadisvara Temple (Brihadeeswarar Temple) is one of the Hindu deity Shiva temple dedicated to the former capital of the Chola empire in the Indian state of Tamil Nadu, Thanjavur, built under Rajaraja I.. He is considered one of the most important temples in South India and is considered one of the three major temples of the Chola Dynasty “(together the Brihadisvara Gangaikonda Cholapuram Temple and the Temple Airavatesvara Darasuram) on the World Heritage Site by UNESCO.
Location and surroundings
The temple is situated on the outskirts of the southern Indian city Thanjavur, famous for its numerous temples. He can be contacted on a secluded side street in the West Main Street. West of the temple there is a forest area south of the Grand Anikut channel.


The Brihadisvara temple stands in a rectangular, 241 × 121 m large temple compound, surrounded by a wall. The wall is decorated with 250 statues of Linga. The only goal of the Wall is located on the east side of the temple grounds. It has two Gopurams. The exterior is higher with about 30 meters, the internal decorated with Hindu stories. On the temple grounds are provided with a height of 3.7 meters, the third highest Nandi statue in India. 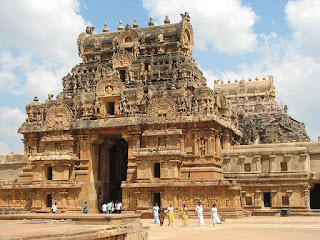 The Brihadisvara Temple is a building of the Dravida style. Characteristic for the Vimana, the tower, which consists of a hollow pyramid and a dome-like top, and the use of similar large stones are (also called monolithic design). The Vimana of Brihadishvara Temple is considered the highlight of the Vimana-architecture. The construction technology of the temple is regarded as clearly and completely, the entire temple complex is almost symmetrical design. The temple was built to represent a royal temple Rajarajas vision of his strength, his power and position of the absolute order.
This entry was posted in Travel to Asia. Bookmark the permalink.