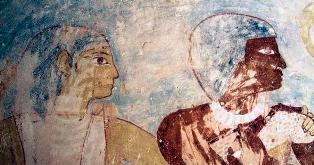 Archaeologists have discovered an ancient tomb dating back to Pharaoh that he was already more than 4,000 years near the Pyramids of Giza. The Egyptian government announced this week.

The surface of the tomb-ka Rudj decorated with paintings of everyday life of ancient Egyptians. One of his tomb walls depict Rudj-Ka was sailing fishing. While on the other walls depict the religious leaders and his wife stood in front of a table covered with bread, geese, and cattle.
Zahi Hawass, Secretary General of Egypt’s Supreme Council of Antiquities, said that this discovery may indicate a large cemetery complex near one of the biggest pyramid. “This ancient tomb could be the first found in the area. We hope to find the tombs are intended for members of the trial period,” said Hawass.
He also speculated that the tomb was probably a continuation of the burial complex at Giza. Therefore, the cemetery on the Giza plateau is known already too crowded.
This entry was posted in Hot News. Bookmark the permalink.